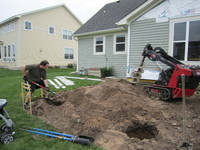 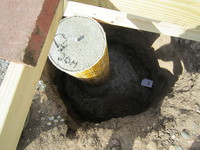 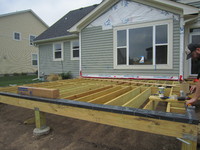 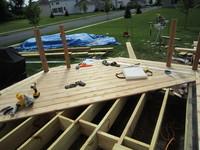 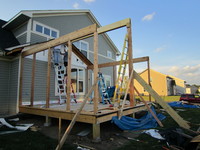 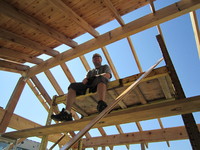 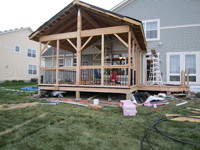 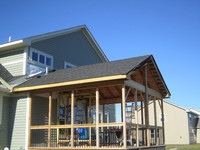 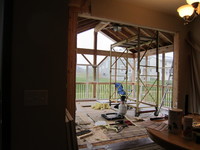 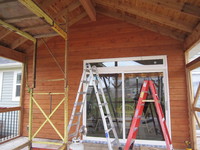 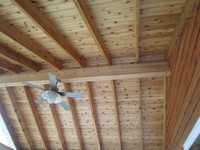 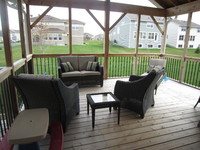 Over the summer of 2011, I built a screen porch on the back of our house. Our first daughter was born in February, 2011, so of course the logical thing to do was to start a huge project a few months later!

The plan was to build a screen porch with a smaller uncovered deck to the side. I also wanted the porch to have a high wood ceiling with exposed beams. That created some additional work, but the result was very nice in the end.

Our house had a small bump out on the back that was a perfect place to extend the roof line out into the yard, which simplified tying the roof into the existing structure.

Various people helped with labor throughout the project, so when I say “we” below, I mean me and the wonderful people who helped me out (Rick, Adam, others).

We first removed the sod and built a traditional deck base, although it was much heavier duty due to the design of the structure it would support. We also added screening below the deck boards to keep bugs out from below.

The next step was the start building the roof structure. This was an interesting challenge because to start with we needed to put up the main post and beam structure, but had only a couple ladders instead of scaffolding. Fortunately the people who built my house had provided a large header in the wall over the existing window which was sufficient to take the load of the new beam on the house side. The theory of the type of construction I did is that each end of the beam on the roof peak needs to be able to support half of the roof load, because there are no trusses.

Next we added the ceiling material/roof decking. It was made with pre-finished cedar tongue and groove boards and left exposed. On top of that went sheathing, and a traditional shingle roof to match the rest of the house. Metal fascia/soffit and gutters were installed the roofing was completed.

Before the final trim went up, I wired the lights/outlets on the porch. There is a ceiling fan/light hung from the main beam, several outlets around the porch, and flood lights for the yard mounted on each corner of the exterior. At some point in the project I also ran speaker wire from the porch walls to my living room entertainment center for outdoor speakers.

After the porch structure was completed, we replaced the existing window in the wall between the porch and house with a large sliding door. This allows us to leave the sliding door open and have the kids go in and out to the porch. The screens on the porch keep the bugs outside where they belong.

Once the door was installed, we sided the wall with cedar siding to match the rest of the porch.

The last step, which was completed the next spring, was to add screens on the entire exterior to keep the bugs outside.

Thanks to my amazing wife Andi for making this project possible by taking care of our infant daughter while I spent my weekends hammering away (literally and figuratively) on the porch project.