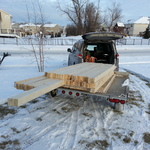 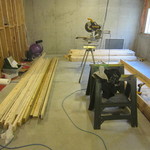 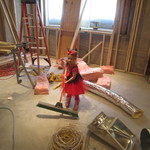 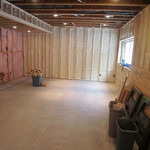 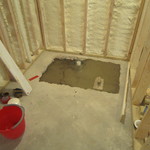 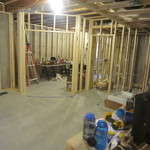 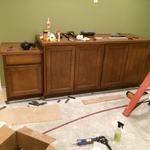 We moved into our current house in Spring of 2009. We’ve always wanted to finish the basement, and I’ve been drawing plans in my head for years. So when I had 3 weeks off in December 2013, I decided it was time to finally get started on the project.

The plan originally included a wet bar and fireplace, but in the end we decided not to do either of them. The fireplace didn’t work out because it was very difficult to vent the pipe through the joist space we had available. The fireplace rep’s answer was to just remove some of the heat shielding. “It should be fine” he said. I kindly thanked him for the advice and ran the other way. We decided to skip the wet bar as well because it isn’t something we would really use much, and the location where it would sit means it could be added on later if desired.

I did all the work myself with the exception of the spray foam insulation, carpet and drywall. The list of work included:

Start to finish the project took several months. The progress went really fast the first few weeks when I worked 18 days in a row on it, but slowed afterward when I was back at work, because I could only work on the weekends.