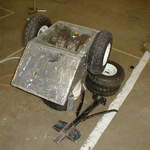 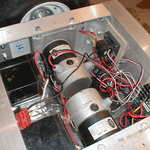 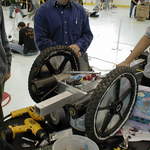 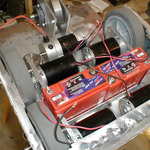 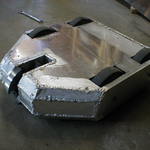 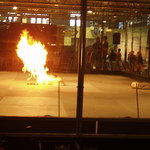 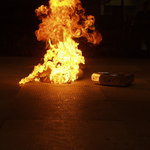 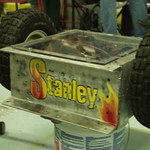 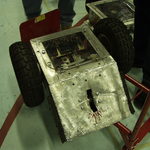 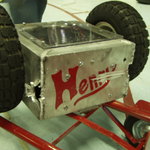 For several years during college I built robots for robot combat events. I mostly competed in a local competition called Twin Cities Mech Wars. It was a dedicated group of volunteers that managed to put together a number of annual events, before finally folding as interest in the “sport” waned.

I certainly learned a lot, and got to use a number of interesting tools and technologies. In the later robots, I used the OSMC control boards, which were an early form of open source hardware design. It was fascinating to learn about the huge forces involved, and the large amounts of current required in momentary surges as motors go from 0 to full torque in an extremely short period of time. Just writing about it makes me want to go hack another one together!

My memories of all of the various events are fuzzy, but I’ll recall them as best I can remember.

Our first robot was named Spin Cycle. Our team consisted of a couple of college students that got together to see if we could hack something together. We did, it wasn’t very good. We scavenged some old wheelchair motors, some small plastic bike tires, and some self built relay based motor controllers and electronics. It worked, barely. We could go forward, back, or spin in either direction, but only at full speed. Fortunately and unfortunately, full speed wasn’t very fast. Spin Cycle got beat pretty badly, but we had fun, and were excited to try again. We also learned that plastic and wood were not sufficient materials.

For the rest of my robots, I worked mostly solo; the rest of the team went back to other interests.

Over the next few years, I built a series of robots that ranged from very simple (Stanley) to more complex (Ragnar).

Stanley was a “wedgebot.” It’s strength was being extremely durable, fast and maneuverable. I could use the arena to my advantage by moving the other robot into obstacles, or trying to destroy whatever weapons they had. Because the front had a very durable wedge, spinning weapons would deflect upward, often causing them to hit the ground or arena sides, creating all sorts of exciting damage.

With Stanley, we won several events and competed in the national championship event.

This video is from one of the national championship matches. It shows what you DON’T want to happen to your robot. Amazingly, Stanley mostly survived all those huge impacts. I don’t recall what failed in the end, but 1/2 of the drive train stopped working. I think there was a loose wire somewhere after all of those impacts.

Henry was very similar to Stanley, but we added a spinning kinetic weapon to the front slope. It looked cool, but wasn’t large enough to be very effective. It made pretty sparks when it hit things, though.

Ragnar was the most technically complicated robot I built. It had 4 drive wheels and 4 drive motors. It also had a large kinetic blade in the front. It was the same top/bottom so it could flip and still function identically. It was extremely fast, but unfortunately not durable enough. Because the drive train was gear based, damage to the frame caused misalignment and eventually failure of the drive train. Lesson learned, isolate the drive train from the frame.